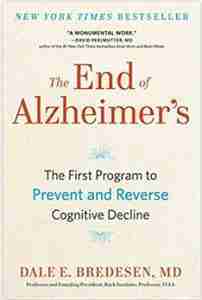 I am sharing information here that is very close to my heart. My father and grandmother both died with Alzheimer’s disease. Plus my mother had dementia in her later years. None of us wants that future and I’m very excited that there is good news to share — the decline of Alzheimer’s is not inevitable.

I first wrote about this topic in 2017 when I learned about Dr. Dale Bredesen’s book The End of Alzheimer’s – The First Program to Prevent and Reverse Cognitive Decline.  Dr. Bredesen, along with other researchers, has just published a peer-reviewed proof-of-concept trial in the Journal of Alzheimer’s Disease.   The results for the RE-CODE Personalized Medicine Protocol he has been developing and testing for the past few decades are extremely encouraging — I’d even say amazing.

Design of the Study

The 9-month study followed 25 people with either mild, not subjective, cognitive impairment (meaning abnormal cognitive testing) or a diagnosis of Alzheimers. Note that these are people  well into cognitive loss and are the same group that “Alzheimer’s drugs” target. In fact, this study used the same cognitive measurements that were used in the drug trials of the most recent Alzheimer’s drug, Aducanumab, which has not met expectations, as well as a new one, Donanemab, not yet available to the public.

In both cases, the pharmaceutical slowed the decline of cognitive impairment a bit.  In contrast, 84% of those using the RE-CODE approach actually improved cognitive scores.  No drug has ever done anything more than slow cognitive decline temporarily. So this is a big deal, something unheard of in any other Alzheimer’s treatment.

In addition, in five of the six metabolic measurements, subjects improved at statistically significant levels; challenges with the pandemic limited data collection in the sixth instance.

More about Alzheimer’s and the Study Results


Dr. Bredesen gave a webinar two weeks ago, now available on youtube, that includes info on:

So what’s actually involved in the RE-CODE Protocol?

There are SEVEN areas that when put together, produce a positive synergistic effect on brain function. In order of importance, they are:

It’s about 45 minutes followed by questions.  The presentation includes a link to a Free Cognitive Assessment  (15 minutes online with specific follow-up, including a free 30-day trial). By the way, the RE-CODE program is also recommended for brain fog such as with COVID.

Is this an easy process?  Certainly not at first.  But it gets easier!


And it can make a significant difference and there are many resources available.

Bottom line: we all want to prevent cognitive decline and we can do a lot to achieve that end. I personally have been engaged in this endeavor for several years now and am constantly learning to improve my personal program.  Alzheimer’s has been in my family for two generations – I want it to stop with me.

Alzheimer’s Disease is Preventable and Reversible!